A Cantata and a lot of life around the shrine 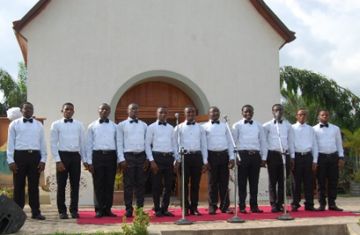 On the 28th of May, the Schoenstatt Fathers in collaboration with the seminarians convoked a massive cantata in other to mark the end of May devotion as customary in Nigeria. It was the first of its kind which drew many dignitaries all over the country to come and witness the celebration. The theme for the cantata was “Mary, the highest honour of our race”.

It was a day celebration which started from 2:30 pm with exposition of the Blessed Sacrament for private adoration. The adoration was later concluded with the Rosary of the Blessed Virgin Mary which ushered us into the cantata proper. Delegates from various religious communities came to witness the event, most of which are the Dominican Fathers, the Daughters of Mary Mother of Mercy Sisters, Josephites, the Diocesan Major Seminarians and lots more.

We also invited reputable choirs and individual performers to grace the occasion with their vocal talents. Among the numerous performers is the 2014 finalist of the Nigeria got Talent Show by name Azuka Daniel John alias A-String. It was for some people their first time to visit the shrine and so the event was not just an entertainment of the sensitivity of man but also the great opportunity of Pentecostal experience. The welcome address was given by the rector of the students’ house who was also the coordinator of the event. In his address, he congratulated the students for the wonderful project of the cantata which was the initiation from the students’ house in honour of the Queen of May. The musical cantata followed immediately after the address and at the end the closing prayer was given by the novice master, Fr. Kingsley Okereke.

Convention of the coordinators of the Pilgrim Mother’s Apostolate. 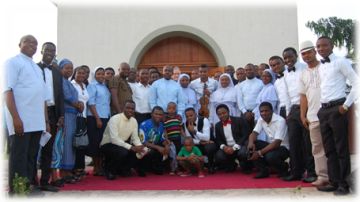 It was only a day interval after the celebration of the cantata that the Schoenstatt movement in Nigeria convoked also the convention for the coordinators of the Pilgrim Mother’s apostolate in Nigeria. It is a yearly convention whereby the different coordinators around the country come together in the shrine to renew their commitment and seek for a better way forward for the apostolate. It is also a period they share their experiences, difficulties and challenges which they encounter in the apostolate.

This year’s convention happens to be an extraordinary one because it gave a new life to the apostolate. Different people both young and old showed great commitment and zeal to the apostolate. Schoenstatters in Nigeria are burning with zeal for the mother’s apostolate. This is mostly expressed in the massive turn-out of the coordinators despite the economic difficulty of the country. 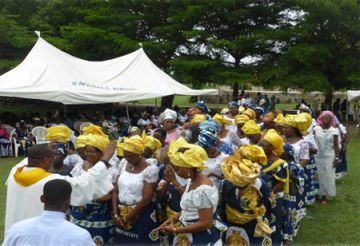 The program started officially on 30th but arrival and registration took place on the 29th of the month of May. The rosary was prayed coupled with the celebration of the Holy Mass. There was a significant event in the night of Saturday which was called night of the shrine. The pilgrims lighted the candle around the shrine and while saying the rosary, they walked round the shrine with great devotion and edification. They were untiring in their prayer and displayed great love to the Victress of Schoenstatt. On the 31st of May, being Sunday the Solemnity of the Most Holy Trinity, was the consummation of the convention. There was the celebration of the Holy Mass which was presided over by the coordinator of Schoenstatt Apostolates in Nigeria, Fr. Paul Nwachukwu. Concelebrants are: Frs. Kingsley Okeke, the novice master and homilist; Ibeh Reginald, the rector of the students’ house; Juan Pablo Catoggio, the local superior and Claudius Uwaoma, the spiritual director of the students’ house. 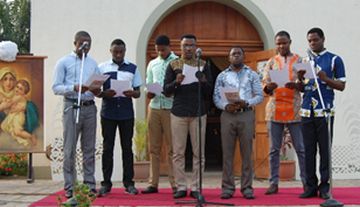 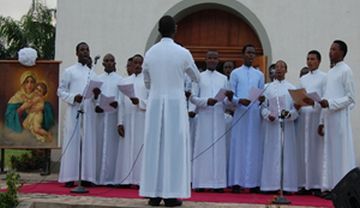