Schoenstatt Fathers in Kerala, India, conducted this year - it has already become a tradition - a teenage camp for both boys and girls called NEW GEN-2016 in Mary Matha Schoenstatt Bhavan, Aloor (Kerala, South India). There were 44 participants and 12 coordinators for this four days programme. 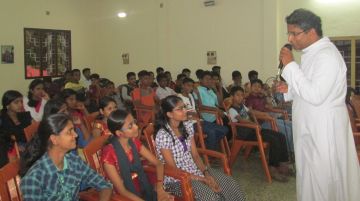 Live in society with a new spirit

We aimed to motivate the young participants to think how can they live in the society with a revived spirit. The theme of the camp was "Young people and the Nature". Young people sense the need of respecting nature. The question was mainly our concern for the nature, also inspired by the recent Encyclical Letter of Pope Francis "Laudato si'". The cause of natural calamities was also theme of our camp. The youth discussed mainly about the ways and means to respect the nature and above all the Waste Management. We observed the well planed system of Waste Management in western countries. A programme of Waste Management was worked out in this camp which is very practical, and young people promised their cooperation. Practical resolutions were in such a way our little contributions to preserve the nature. 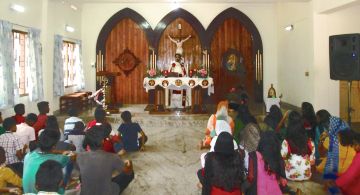 Meeting the young couples of the Family League

At the end of the camp all boys and girls made their promise to our Mother and Queen of Schoenstatt, and then went home with a renewed spirit as messengers of the MTA.