"We are grateful for the Almighty has done great things"

The new born child of Divine Providence, the Providence Region in Kerala solemnly celebrated its founding together with the Golden Jubilee of the existence of Sion Fathers Community at 4 pm on 28 November 2015 in the Regional Headquarters of Providence Region in Aluva. The celebration began with the thanksgiving Holy Mass presided over by His Beatitude Cardinal George Alancherry, the Major Archbishop of the Syro-Malabar Church. At the very outset of the Holy Mass, Fr Joy Madathumpedy, the Regional Superior of Providence Region, extended a cordial welcome to the Cardinal and the other dignitaries from various spheres of life present. In his welcome note, he gratefully acknowledged the commendable contribution of all, who were instrumental with their sacrifices and services on our ways of progress to this stage of becoming a Region. 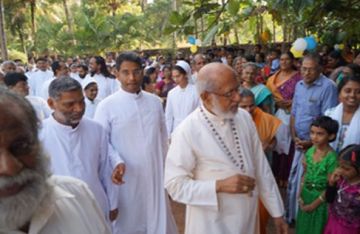 The Cardinal in his address acknowledged and appreciated the Kerala Schoenstatt Fathers and their contributions to the Church of Kerala. During his homily, his exhorted us of our Mission as Secular Institute, that we are called not to conform ourselves to the world but to fill the world with the presence of God. Besides he lauded the Schoenstatt Movement for its unique Charism and felicitated the Schoenstatt Movement for their commitment and dedication to the Covenant with the Blessed Mother. Fr Joy Madathumpedy, the Regional Superior, and Fr Antony Plackal V.C., the former Rector of Schoenstatt Study House, concelebrated in the Holy Eucharist.

The inaugural ceremony was mostly a religious event. Hundreds of people from far and near joined us to celebrate this significant day which will be marked with golden letters in the history of the Providence Region. The guests who graced the event included the Bishop Emeritus Mar Thomas Chakkiyath, Pontifical Seminary Rectors, President, Superiors, Priests and religious from close circles, a few collaborators, benefactors and well-wishers of our Community.

The one and half hour long liturgical celebration concluded with the vote of thanks proposed by Fr Babu Kalathingal, the First Councilor. He thanked the special dignitaries and the former councilors who were present.

After the thanksgiving Mass, the invitees were served a sumptuous agape in our dining halls. Special congratulations to Saltt Kuttur which prepared a Special Documentary on Schoenstatt and its Mission.