2 Alone – without a father

The difficult way before the birth

Illegitimate children and their mothers were disenfranchised. Often the young women were maids or servants, like Catherine Kentenich. Not infrequently it was the sons or the senior staff who were looking for a relationship. If women became pregnant, the „shame“ of the pregnancy to the family of the house was eliminated by the fact that the young woman had to leave the farm and the area. They lived mostly in difficult economic conditions and were socially ostracized and discriminated against.

Even the ecclesiastical judgement was no less harsh. „Affected girls“ had not adhered to the rules of etiquette and conduct. All too often, the blame for their plight was placed on them, because they were the ones who had misled the men.

In addition, the children of such a relationship were regarded as „illegitimate“. This concept, which is now used for foreign immigrants, who enter a country „illegally“, indicates as to how the children were valued and treated. They should actually not be there, should not exist. In addition, reference is made to this later in the baptismal register of the parish of Gymnich’s Saint Cunibert next to the name Joseph: „illeg. Catherine Kentenich“. Even as adults, those born as illegitimate had fewer rights in the Church, for example, a regular seminary could not accept them.

The „shame“ could only be resolved by marriage. But the biological father, Joseph Koep, refused this. In later years, Father Kentenich tried to influence him to marry his mother, but his refusal was final. This was not altogether understandable considering that Joseph Koep remained unmarried until his death. There were no known reasons for his refusal. So when it is reported in biographies, that he was a honourable citizen, even elected to the municipal council, the question still remains why he left a young woman to such a fate and why he let his child live with the „defectus natalium“ (defect at birth), as it was called in Church language. The then 23-year-old Catherine had to live with this family, social and ecclesial life-burden. 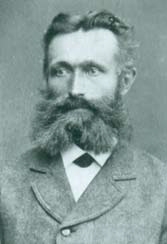 So it was clear that she had to leave the Heuserhof and, thereby, her workplace, where she earned her livelihood. The „moral failure“ with its far-reaching consequences, did not allow her initially to return to her parental home. She stayed with her sister Sibilla Peters, who with her husband ran a restaurant in Nörvenich. The father of Catherine, who obviously loved his daughter, initially adhered to the social demands, but then took her into the parental home at the insistence of her mother shortly before the birth of her child. There she was given a room in the attic. 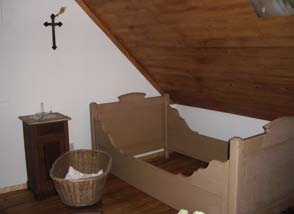 Night of the decision

During her pregnancy it is reported that on a night when Catherine was in such an inner state of despair about her situation she even contemplated taking her own life. She was convinced that she could not overcome her desperate situation. Quite obviously she fell into such a deep depression that she thought she could not overcome it. She probably could overcome this condition, with the help of her mother, who felt her plight. From this experience, she went forward with the firm resolution to accept her life-situation and the consequences. During that night Catherine gave her child expressly to the care of Mary.

Today we know that for Father Kentenich his illegitimate background and the lack of a biological father was a source of great suffering for him till the end of his life. He himself describes that this heavy cross from his childhood weighed down on his shoulders.

During his time in high school in Ehrenbreitstein as a 16-year-old in 1902 he wrote about his life in a somewhat dramatic poem. The other students talked about their positive experiences at home, but he could not.

Homeless
Abandoned and lonely
I wander the world,
My father rejects me,
Nowhere is home.
Plucked by harsh hand
From a mother's love,
A cold world rejects me
I'm lost in the crowd.
I see peace all around me,
They speak with great cheer
Praising their parents –
I weep and walk out.
My heart is quite frozen
For no one loves me
I wait and keep watch:
Will no one love me?

The lack becomes a mission

These serious events and experiences in his childhood remained a major influence in his life. He does not bend under such a heavy fate, but discovers in it his personal mission. He feels that people are moving towards a „fatherless society“ what is evident in the cultural upheaval of the 60s. His own need and his lack of a father make him the spiritual father of many.

Thus, for him the fatherhood of God, which is mediated especially by human fathers and childlike trust towards God remain themes for him.

"Even if my father and mother forsake me, the Lord will take me in."

(All:) Lord God, from whom all fatherhood comes, we give thanks for the mission of Father Kentenich
to proclaim you as a loving father, to ourselves and to many people.
We give thanks that together with countless people he could pass on your love.
We pray for all natural and spiritual fathers:
Let them follow his example and through their care and love make many people happy and thereby lead them to you.
We also pray for those who have not had the experience of a good father:
May they find people who will make up for this deficiency, so that they can believe more easily in you. Amen.