3 Being a family - In the house of the grandparents 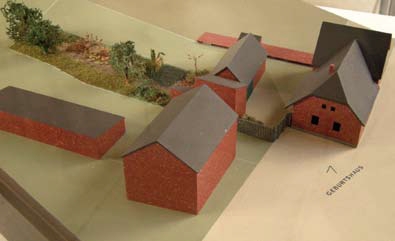 Little Joseph saw the light of the world on Monday, 16 November 1885. He was born in the house of his grandparents in the room of his mother on the first floor at 7.00 o’clock in the morning.

As the local fair had been celebrated the preceding weekend in Gymnich according to the well-known custom of the Rhein, the municipal offices were closed on this day. Therefore, the registration of the new-born only took place on 18 November. Because of the strict requirements of the Prussian government, often the registration date was entered as the day of birth. Consequently, this date often also appeared on official documents. Naturally his mother Catherine always celebrated her son’s birthday on 16 November as does the Schoenstatt Movement.

Despite the difficult circumstances, the young mother was very proud of her son. At the age of two and a half years she let him be photographed. 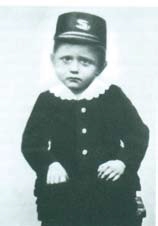 Even if Joseph had to grow up without his biological father, he experienced however a functioning extended family. His grandfather, Matthias Kentenich is described as a person of respect, who ran a small haulage company until his death – until the third birthday of his grandson. The grandmother, Anne Mary Kentenich continued to care for the family into her old age. Also uncles and aunts were in contact with the Kentenichs at Kunibertusplatz in Gymnich. A whole flock of children lived in the house because the grandparents took custody of three further children from the family. The hospitality of the Kentenich house was again evident when they took in a family in need with four children for some time.

There is no shortage of exciting tales from the early years of the little Joseph. It is reported that Joseph was one day in a basket, which was tossed by a cow with its horns. It is recalled that this event had a good ending, because the little one landed without injury on the meadow. On another occasion the three-year-old fell into a well at a neighbour’s house and the grandfather saved him from drowning. 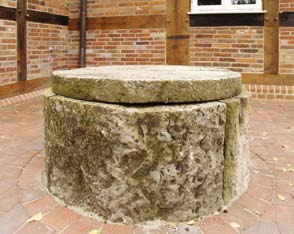 Joseph like other boys also carried out his little tricks. He secretly climbed the bell tower of the church with the son of the sacristan. When the Parish Priest closed the door to catch the intruders, they climbed through the loft of the Church nave to the choir and escaped by slipping down the pillars of the altar. Other stories tell of a soaking wet boy who liked to place himself under the gutter until the water ran from the legs of his trousers, or of friends who threw his hat over the creek which meant he had to jump into the creek to get it back.

Despite strict discipline in the grandparents’ house it was possible, in the evening to jump on the straw mattresses and to play hide-and-seek in the whole house. Above all, it was possible for the young children to say what they thought.

To be family and to experience home

The experiences in the family were for Father Kentenich his personal background experience when he later gradually built up the Schoenstatt Movement. The various communities for women, men, couples, young people and priests should see themselves as families. A hearty connectedness should prevail in the communities, as in a good family. He speaks repeatedly of a with-each-other, for-each-other and in-eachother experience. 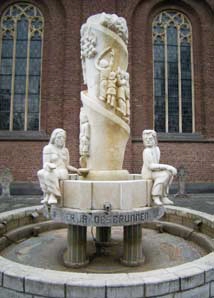 In addition, he understands the family as the archetype of a spiritual home. Where people experience care and love, where their basic needs for protection, identity and connectedness are satisfied, where common values are lived, there’s home.

Church as the Family of God

Among other images for the Church such as „the pilgrim people of God“ or „the rock of Peter“, Father Kentenich also uses the image of the family for the Church. In this way a fraternal Church should develop and grow. The Pope, bishops and priests should not only be engaged in leadership, but should also become real fathers. There should be no above and below that quickly contaminates the atmosphere in the Church, but rather an in-, with- and for-each-other, like a family.

Hence, although he experienced adversity in his family background, he experienced family through the love of his mother and his grandparents, and in this way he could also develop a sensitivity to the needs of people for family and the need to have a home.

Triune God, you are the origin of all community and also creator of the family.

(All:) You have bestowed in the human heart a deep longing for family, shelter and a home.
People living together in unity and peace are a transparency of God in a special way.
We pray to you for all families: Let them stand together and care for one another in love, loyalty and happiness.
We pray for all people and especially for children, who have to live without a balanced family:
Let them find people who are able to provide love and shelter for them.
And we pray to you for the Church and its manifold communities:
Let them grow together to become one great family of God. Amen.