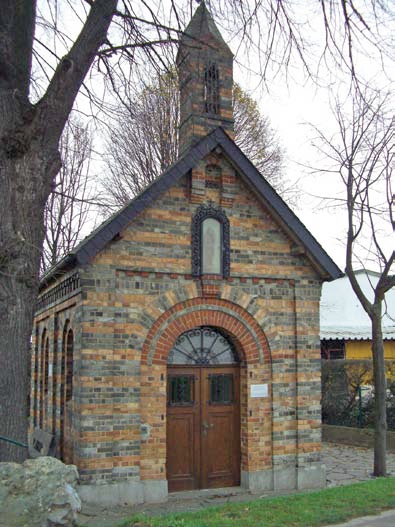 West of the town centre is Saint Anne’s Chapel, also commonly known as the „holy house“. As the foundation stones show, the chapel was built as early as 1588, but has had a very varied history. That the chapel was a favourite place of prayer and devotion to Saint Anne, mother of the Blessed Mother, is shown in the frequent renovations and renewals. Five years before the birth of Joseph Kentenich in 1880 the chapel because of progressive decay, was rebuilt. The year recorded on the gable is a reminder of this reconstruction. After being badly damaged during the war in 1943 the chapel was restored in 1944.

Even today, Saint Anne’s Chapel is a place of silence and reflection. A festival week, known as the “Anne Octave”, is held around the chapel every year. In this way the Chapel is today an integral part of the community life. According to tradition Saint Anne who is widely venerated as the patron saint of married couples, pregnant women, nurses and housewives, is asked by the women of the town for help to conceive their children.

Pilgrimage booklets and hymnals are found in the Chapel in which poetry, prayers and songs to Saint Anne are included which were in accordance with the tradition of an apocryphal Gospel to the mother of Mary. In a prayer of petition for women and mothers it is requested that God should strengthen their faith through the intercession of Saint Anne and that they may become good wives and
good mothers of their children.

A unique Saint Anne’s litany calls upon the mother of Mary for the intentions of marriages, families and, in addition, the tasks and the attitudes of faith in everyday life: 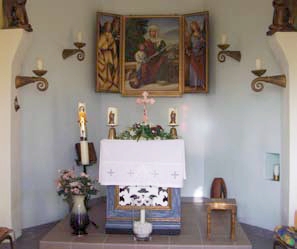 Joseph and his family were part of this parish tradition. Even though there is no written record, we can take it for granted that he took part in the processions to the Chapel of St Anne, as well as the devotions and prayer times of the parish, with his mother and grandparents. In this way he grew quite naturally into the religious life in his parish and his times. 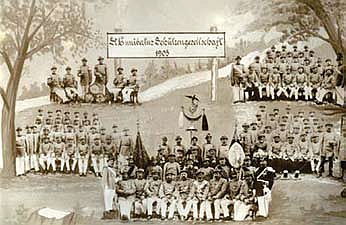 Part of popular piety in Gymnich included belonging to a fraternity

The Saint Sebastian Fraternity founded in 1139 in the town was initially devoted to charitable work. In the 14th century a Plague Fraternity grew out of the Saint Sebastian Fraternity, caring particularly for victims of the plague. In the 15th century mention was made of a Protection Fraternity. In its 870 year history the Fraternity has followed the motto „Faith, Morals and Home“ and in this way considerably influenced village life. Presently the members, who wear their blue uniforms at festivals, are active in all the societies, even in the Lutheran community.

The Saint Cunibert Fraternity with its green uniforms was founded in 1849, because of a threat to destroy the castle. The aim of the fraternity was to protect the castle, church and rectory. 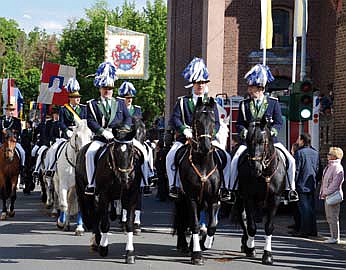 The „Gymnich Ride“, which is well-known way beyond the village, is largely supported by the fraternities. Every year on the Solemnity of the Ascension a procession takes place according to a set form which includes a pilgrimage with some walking and others on horseback around Gymnich (13 km).

The procession has its origins in a vow made by a Knight Arnold (Arnoldus de Giminich) in the 13th century. The vow was made during the 5th Crusade when his life was in danger whilst being stuck in an Egyptian swamp. He was miraculously saved, after he vowed to make an annual “Ride” around Gymnich, so the legend goes. A coot amongst the reeds startled his horse, and after a big jump, the horse reached solid ground.

The revived custom of the Gymnich Ride by the then Parish Priest Johann Joseph von der Burg in 1885 was a real attraction, which no doubt also impressed a little boy like Joseph Kentenich.

Later in developing the Schoenstatt Movement Father Kentenich always emphasized the importance of a „Pilgrim’s Movement“. He was of the opinion that what is important for the Church must be carried by the people and must be alive in the people.

The Church, should not only promote the objective proclamation of the Word of God and the teaching of the Church, but should also promote popular piety that entwines biblical texts and the beliefs of the Church. This piety has the characteristic that it is often very emotional and thus people respond not only intellectually, but rather also from their hearts. This emotionalism is also necessary, so that faith really touches people’s lives and grows. Of course, such popular piety must always reorient itself according to the Bible and the teachings of the Church as well as the circumstances of the times. Nevertheless such popular piety should not be lost, or faith is in danger of being intellectual and removed from life.

in the footsteps of Father Joseph Kentenich we have the experience, here at Saint Anne’s Chapel, of people who together live and give witness to their faith in a religious atmosphere. At the same time we sense that this atmosphere of faith is dwindling in our country.

(All :) We pray for our Church, that the Church may courageously continue to pass on the Good News of the Kingdom of God in a new form.

We pray for our families. Look upon the parents who give their children life out of love and who educate them. Look upon the grandparents, educators, teachers, and the priests who strive to create an atmosphere of joy, community and faith.

Bestow on us all the courage to work together to build a future in which the faith of the people gives meaning, support and joy.