7 Pride and Joy - The moated residence at Gymnich 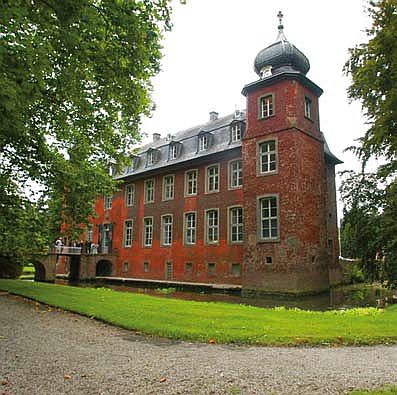 The well-known moated residence ("Wasserburg") at Gymnich was also the playground for the many adventures and pranks of children, which were equally enjoyed by the young Joseph Kentenich.

Because of the fame of this Residence, the following is some information concerning its history: For centuries the Wasserburg was the seat of the Rhenish Knights of Gymnich. The first residence was built in 1354 and a successor was built in 1419. The residence remained in the possession of the family until the expiry of the Knights lineage. At the time of Joseph’s childhood the Wasserburg belonged to the Imperial Count Wolff Metternich and his heirs. From 1971 the residence was used by the Federal Government as a guesthouse. It was here on 25 August 1989 that a secret meeting of Hungarian and German heads of state took place and as a result the border for embassy refugees was opened on 10 / 11 September of that year. In 1998 the father of the musical group ‘the Kelly Family’ purchased the Gymnich residence, which was, however, forcibly auctioned in 2012. The castle, which is considered to be suitable for concerts by artists like Udo Jürgens and Chris de Burgh, may well be converted into a hotel and a restaurant. 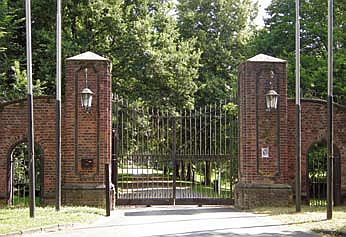 He was part of everything

In the Kentenich biography it is reported: The Residence Garden was the place in the summer for fishing, in winter for snow games and as it happened on one occasion Joseph and his friend fell into the water. The forests enticed the young people to play hide and seek and to build hide-outs. A child’s imagination had virtually no limits. His friend said of him: "He was always part of everything."

For all the reserve or unobtrusiveness of the family Joseph apparently also simply enjoyed life.

More than a village

But then Gymnich was not a village like any other. It had a moated residence! If one considers the history of this building, then one can imagine that the villagers were proud of "their" Wasserburg. Perhaps this is also one reason why Father Kentenich in later years often expressed his appreciation for people when he said that all are king’s children. This is where fairy-tales combine with the feeling of being something special, which is valid for all people.

Creator of all people,

you have put a great longing for life in the heart of all. People want to experience joy and be important for others.

(All:) We pray for all people and especially for children: Let joy prevail in their lives over grief and suffering. Let them feel and experience that they are needed by all people.

We pray for all who suffer from low self-esteem: Let them learn what talents you have given them and how they can use these skills for themselves and for others.