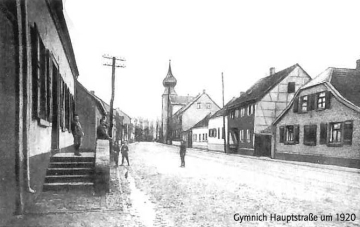 Joseph Kentenich was born in Gymnich near Cologne in 1885.
In 1894, he went to the Saint Vincent orphanage in Oberhausen.

At his admittance to this orphanage, his mother dedicated him to Mary, the Mother of God. Eight-year old Joseph very consciously went along with this dedication as his mother spoke. Mary took over his education and care from then on. In retrospect, Father Kentenich professed: "What I am and what developed in Schoenstatt I owe to the Mother of God." 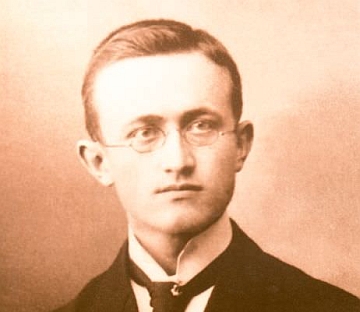 In 1904, he joined the Society of the Pallottines and successfully completed his novitiate and theology studies in Limburg.

For several years he endured a severe inner crisis that led him to the edge of his strength. The highly gifted Joseph Kentenich was driven by the question: What is truth, and can I recognize it? The doubts and uncertainties that beset him never touched his love for Mary. The Mother of God led him out of his inner torment. In an indescribably deep way, she shared her love for the Triune God and for people with him. 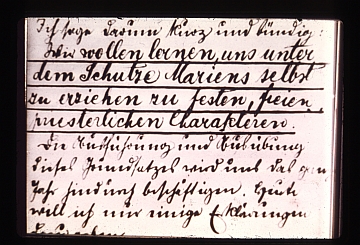 He was ordained to the priesthood in 1910 and at first taught in the high school of his community in Ehrenbreitstein. Beginning in 1912, he was the spiritual director for the students of the newly erected seminary high school in Schoenstatt / Vallendar. It became apparent that Father Kentenich was a gifted educator. His goal of education was clear and filled the students with enthusiasm: to be firm, free personalities, to live holy lives in the midst of the modern world. Father Kentenich guided the students to serious self-education, and above all, offered them Mary as Mother and Educator. 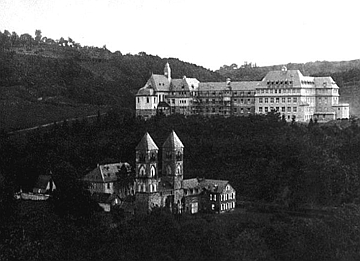 On October 18, 1914, with some students he dared the first step to found the Schoenstatt Movement. They sealed a covenant, "a covenant of love," with Mary in a small chapel in Schoenstatt. Its content is the petition to the Mother of God to be present in this chapel in a special way and to work as the educator of the free person. Father Kentenich and the boys trusted that a place of pilgrimage and grace for many people would develop here. They wanted to give their own contributions toward this goal through a radical life based on faith and engagement for Schoenstatt. "Nothing without you - nothing without us" was the short formula for the intensive communal life with Mary that now began.

The vision of the founding hour gradually became reality. Today the chapel in Schoenstatt is the place of origin of a worldwide movement of men and women, children and youth, families and priests. Meanwhile there are ca. two hundred Schoenstatt Shrines in more than thirty countries all over the earth. Many people make pilgrimages there and ask Mary for the grace to realize their Christian calling in the midst of all the challenges of life in Church and society.

Prisoner in the Concentration Camp of Dachau 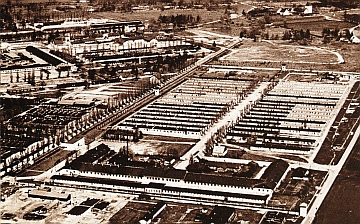 From 1941 to 1945, Father Kentenich was a prisoner of the National Socialists, first in the prison in Koblenz, later in the concentration camp in Dachau. He continued to work fearlessly in the concentration camp for his life's task to proclaim God's merciful love to people and to help them ? with Mary’s help ? to become great lovers. Through Father Kentenich many prisoners could experience God intimately in the hell of Dachau. 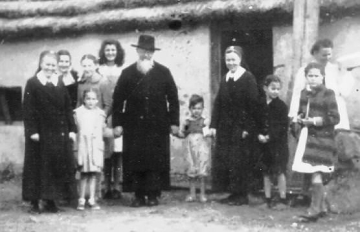 In 1947 / 1948 Father Kentenich began journeys to South America, Africa, and the USA in order to foster international contacts and to help the Schoenstatt members in these countries to build up the movement. His love for the Mother of God urged him to engage himself for her all over the world. 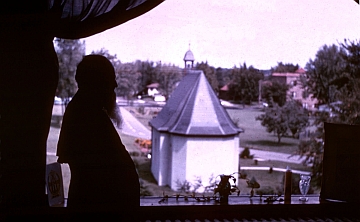 From 1951 to 1965, the Church separated Father Kentenich from his work. Milwaukee WI (USA) was assigned to him as residence. Competent ecclesial authorities examined him and his foundation. Father Kentenich's love for the Church and faithfulness to his work proved themselves during the long years of his absence from Schoenstatt.

Back in Schoenstatt - the final years of his life 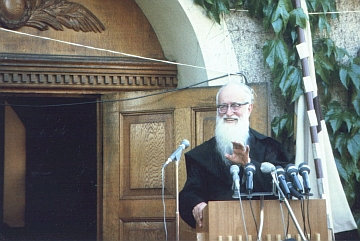 On Christmas Eve in 1965, he returned to Schoenstatt. The eighty-year old priest worked continuously to complete the inner and outer formation of the Schoenstatt Movement during the years still left to him. In spite of deadlines, conferences, retreats, and the daily great workload, his first concern was always the individual. His deep union with God and the fatherly kindness that he radiated gave many people an inkling of the love of God, our Father.

Now he can continue his life's work in a new way. That he does so has already been experienced by many people who unite themselves with him and address their concerns to him.

(Text used with the kind permission of the Secretariat Father Joseph Kentenich, as in: http://www.pater-kentenich.org)