The 5th Bishop in our Community 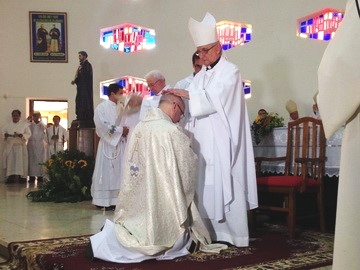 A report from Fr Catoggio, travelling from Nigeria

The main reason of my journey was obviously the episcopal ordination of Fr. Francisco Pistilli, our former Regional Superior. It was a great event under many points of view. Our General Superior Fr. Heinrich Walter also came to share this special occasion.
It is a very special and unusual event for us. Five Schoenstatt-Fathers are now Bishops. The three first were Chileans: Archbishop Francisco José Cox, Bishop Manuel Camilo Vial, and Cardinal Francisco Javier Errázuriz. All three belong to the same course and are over 80 years old. The Cardinal however is still very active in the group of the “C9” advisors of the Pope. The next Bishop of our community was Claudio Giménez, of our Father-Region, now Bishop of Caácupe and President of the Bishop Conference of Paraguay – ordained a Bishop 1991 and now 74 years old.

Youngest Bishop in our Community

The last Bishop of our community is now our Fr. Francisco Javier Pistilli, in Paraguay. Paraguay is a small country. There are 15 Dioceses, one is still vacant now, since the bishop died recently. Encarnación is a very nice city at the river Paraná. The Diocese has more than 600.000 population and about 85 % are catholic. Bishop Francisco has more or less 25 diocesan priests and between 30 and 35 religious priests. It was a special feast for the bishops. In the last decade, unfortunately there were some major scandals involving some Paraguayan bishops. Recently the bishop of Ciudad del Este was removed by the Pope. And on that weekend were ordained Fr Francisco on the 20th and also Fr Wilhelm Steckling OMI (german, working in Paraguay, former General Superior of the OMI) on the 21st as Bishop of Ciudad del Este. Everyone could see the joy of the bishops, who were all present. The Nuncio was very expressive and couldn´t hide his joy.

First episcopal ordination in the Diocese of Encarnación 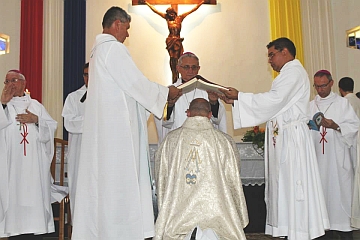 More than 2500 people at the ordination

It was the first episcopal ordination which took place in the Diocese (the formers bishops were already bishops before they were appointed in Encarnación). Since the Cathedral is not so big the ordination was in the largest Church of the town: the Church dedicated of San Roque González de Santa Cruz (the first Paraguayan Saint, Jesuit martyr, founder of Encarnación in 1615 – a former Jesuit mission -, whose uncorrupted heart is kept in the Chapel of the Jesuit School in Asunción that Bishop Francisco attended). There were more than 2500 people at the ordination. 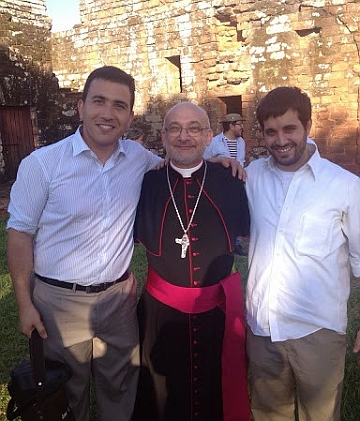 A great event for the Schoenstatt Family

It was a great event for the whole Schoenstatt Family in Paraguay, who came from all parts of the country. The Schoenstatt-boys (secondary students) had their yearly camp and finished it there with the episcopal ordination: 280 boys, with their own colourful shirts and quite loud, had place in a special part of the Church.
Bishop Claudio Gimenez, our brother in the Community, was really happy to ordain Fr Francisco as Bishop. He received him in the movement when Francisco as a medicine student joined the Schoenstatt –Youth, years later he ordained him a priest and now he ordained him Bishop.

An important event for the Schoenstatt Fathers

Many fathers of the community were there: first Fr. Heinrich Walter, almost all fathers who are in Paraguay and Argentina, but also most of Fr Francisco´s course brothers (from Chile, Brasil, Ecuador, Fr Rodrigo from Chile but working in Burundi ) and some others. I think we were over 100 or 120 priests, and 19 bishops (two came from Argentina and one from Canada).
You can see some of the pictures. The pectoral cross he carries is a silver cross of the unity, this was the gift of the Region. The four courses who had Fr Francisco as novice master gave him the episcopal crosier. The gift of our Nigerian community was the chasuble, a very beautiful one. We had it made here in Ibadan, with two simple designs: at the front a motif of “incarnation” (the Star of Bethlehem over the crib), at the back a motif of our blessed Mother (the initials of “Ave Maria” and the crown). He used this chasuble for the ordination as you can see in the photographs.

Dedication of the new pilgrim church in Tupãrenda 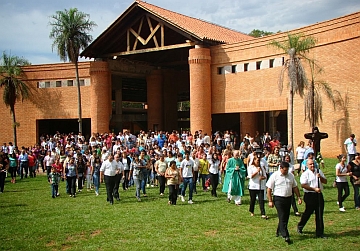 A few days later, on the 28th of December, feast of the Holy Family, the big and beautiful Church in Tupãrenda was dedicated. This is the main Schoenstatt Shrine and Pilgrimage centre in Paraguay. The new Bishop was asked to preside this celebration.

Let us pray for the new bishop and for his mission as Shepherd of Encarnación!