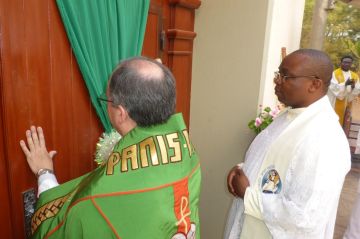 In collaboration with the year of Mercy proclaimed by Pope Francis, the Catholic Archdiocese of Ibadan on 18 December 2015, designated 7 pilgrimage centers for this year of Mercy, one of which is our Marian Shrine in Ibadan, Nigeria. This proclamation was for us both coincidental and providential as it affords a great privilege, task and opportunity to embellish the Schoenstatt Movement and Spirituality in this year of mercy.

With the presence of the Regional Superior

The event of the opening of the shrine door took place on 18 January 2016 and was kick-started by the Divine Mercy prayer by 3:00 pm. The presence of Fr José Javier Arteaga (our Regional Superior, who is in Nigeria and Africa for the first time) and Fr Pablo Pol (both from Argentina) really added colour to the whole celebration. After the Divine Mercy prayers there was confessions for all as well as beautiful songs of praise and worship which kept the whole atmosphere vividly saturated with a longing for God’s mercy. After these, the second phase of the program commenced with the exposition of the Blessed Sacrament. In attendance were about 14 Schoenstatt Priests, 46 seminarians and 50 pilgrims. 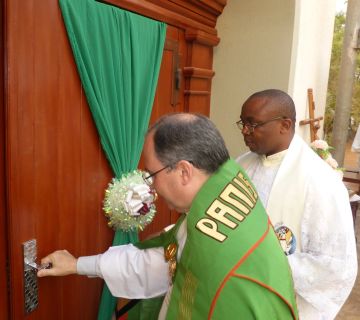 Schoenstatt is a school of mercy

The homily was presented by Fr Kingsley Okereke (the Novice Master) and at about 5:45 pm, Fr Arteaga officially and profoundly opened the doors of mercy of the shrine with the shrine bells ringing and praising the glories of Mary. The opening of the Holy Door was for us an erudite invitation to all to come and dine on this valley of mercy. By this timeless, significant and epoch-making event, a statement keeps calling --- “On this valley of mercy, Mary - the mother of mercy - invites us to come and be tutored in the school of mercy. Schoenstatt is a valley of mercy as well as a school of mercy.”

Schoenstatt was described in the homily as a movement of mercy and freedom. This is seen when Fr Kentenich freely accepted the task of being the spiritual director of the young seminarians in Ehrenbreitstein, Germany. At that time the seminarians were dining on the odious table of apparent and sheer human oppression, suppression, victimization and marginalization. It was a time when they all craved for freedom. Fr Kentenich became providentially the spiritual director and a paradigmatic beacon of hope. The thrust of Fr Kentenich’s work with them was to give them a Marian Education, an education that is mercifully free as well as freely merciful. The Schoenstatt Movement is named after its place of origin: the little Schoenstatt valley in the Rhine region of west-central Germany. In the same way our shrine here in Nigeria is privileged and is for us in this Extraordinary Jubilee of Mercy, a valley of mercy. A mercy that is free and a mercy that makes us free.

At the end of the celebration, petitions were burnt, the benediction was ended and all went away although in awe about this grace-filled event but also singing and glorifying the merciful love and lovable mercy of Mary.