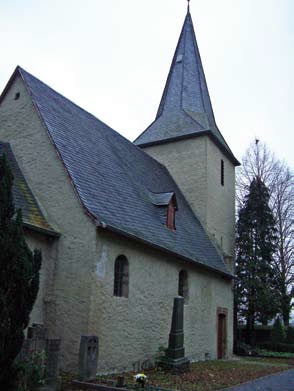 Directions: At the traffic lights in front of Gymnich in the direction of Noervenich turn right at the B477, after 900 m turn right towards Fliegerhorst, then just to the left you can see the chapel. 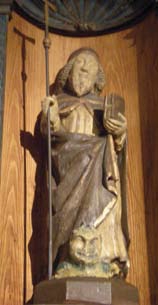 A carved wooden statue of Saint Anthony, the Hermit, dating from 1480 is embodied in the High Altar of Saint Anthony’s Chapel. Anthony, a monk from the lonely deserts of ancient Egypt, holds the Holy Bible in his left hand, and in the right hand a staff with the Saint Anthony Cross.

What is depicted in dazzling colours on the Isenheim Altarpiece appears here as the devil’s face at the saint’s feet: Whenever confrontated with oneself and one's life, one experiences a wild struggle. The inner and outer demons must be defeated: fear, greed, disobedience to God, unholy desires and lusts and many other temptations that may distract people from their way to God. Saint Anthony is thus the symbol of the struggling person and Christian before God.

Saint Anthony’s Chapel belonged to the former small town of Alt-Oberbolheim. It is the only building that has been preserved of Alt-Oberbolheim after the site was handed over to become an airfield. Catherine Kentenich, born in Gymnich on 18 July 1862, found a job in 1880 as a domestic help in nearby Heuserhof. In Heuserhof she became acquainted with the much older estate manager, Matthias Joseph Koep, from whom she fell pregnant. 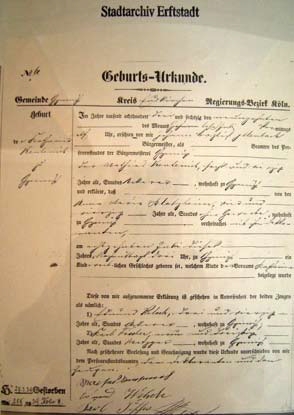 At the time it was usual to pay a short visit when passing a church. So certainly the 22-year-old Catherine often visited this chapel, which was located in the immediate vicinity of her work place. As an unmarried expectant mother she would have probably repeatedly brought her life situation to God and lamented about her suffering. The twice as old Matthias Koep (born 1841 and died 1931) was unwilling to marry Catherine, and her situation as a single mother at that time was hopeless. While unmarried mothers were allowed to enter the Church instead of standing in front of the Church doors like in the old days. Nevertheless they suffered from social and ecclesiastical discrimination.

The figure of Saint Anthony with the demons at his feet reflected in its own way her situation: a life full of self-doubt, despair, living with the feeling of being at somebody’s mercy and being abandoned.

On the left side of the altar of Saint Anthony’s Chapel is an oval oil painting of another figure of faith: Mary with the child, framed with plantornaments. The Saint Anthony Cross above the picture reflects the relationship to the patron of the Church. 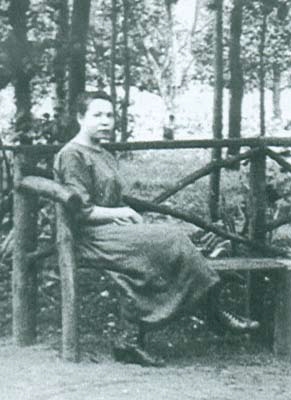 Surely the picture must have been decisive for the young Catherine as it closely reflected her own situation as a mother. Through all the struggles, which are reflected by the hermit, this picture radiates the confidence and hope of new life, which can be seen in the child Jesus in the arms of his mother.

As the pews extend to the side altars, still today, you can reflect and pray intensely before this painting. As with the young Catherine the picture is evocative: Here knelt the unmarried mother before the picture of that woman who too in her own way had to say her yes to her pregnancy. We do not know what words Catherine found in this situation. But they would have been influenced by an inner solidarity of both women and Catherine’s powerless desperate for help.

The trust in the Mother of Jesus, which developed in Catherine over time was marked, on the one hand, by the general veneration of the Virgin Mary of the time. However on the other hand, this trust went even further. Later when the young mother could no longer care for her son Joseph, she took him to the orphanage at Oberhausen. There she consecrated her nine-year-old son to Mary with the request that Mary from then on take care of her son. Father Kentenich saw his mother’s trust in the Mother of Jesus as one of the key moments of his life and work. 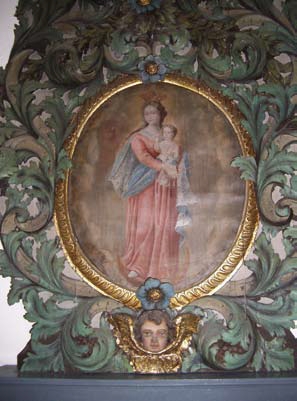 Father Kentenich himself declared in 1955: „Not only today and yesterday but even in childhood did Mary take this position in my life. From the beginning of my life she was present in my conscious soul life. It is difficult to determine from what moment I understood and valued myself totally as her work and instrument. This process can be traced back to my early childhood days“. At that time he also spoke about a prayer to Mary, that “reaches back to his earliest childhood days” which he learnt from his mother whilst they were visiting Strasbourg:

Help us, Mary, in our need,
Help us, Mother of Mercy.
You have the power to save us
in need and danger,
for when we are helpless
your help is always near.
You cannot turn a deaf ear
to the fervent pleading of your children.

Here is reflected a fundamental acknowledgement, which Father Kentenich later formulated himself: The fundamental spiritual impulses of his spiritual family, the Schoenstatt Movement, are founded in his personal history, especially in his childhood. 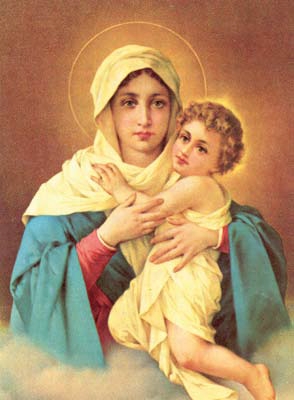 "You formed my inmost being; you knit me in my mother’s womb."

(All:) Lord, we thank you that you look upon and accompany every person from the beginning of his/her life.
We thank you for the special calling of Father Kentenich that began in his mother’s womb.
You accompanied the young woman Catherine in the difficult situation of her pregnancy and motherhood.
We pray to you especially on this occasion for all unborn children and their mothers, especially those who are in need.
Grant them your assistance and the help of other people. Amen

This maternity of Mary in the order of grace began with the consent which she gave in faith at the Annunciation and which she sustained without wavering beneath the cross, and lasts until the eternal fulfillment of all the elect. Taken up to heaven she did not lay aside this salvific duty, but by her constant intercession continued to bring us the gifts of eternal salvation. Therefore the Blessed Virgin is invoked by the Church under the titles of Advocate, Auxiliatrix, Adjutrix, and Mediatrix.