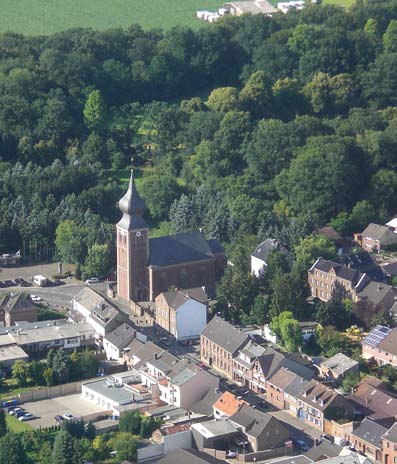 The statement „He loved the Church“, that is written on Father Kentenich’s tomb, has a lifelong history which started in Gymnich.

The entire Kentenich family is described as a very religious and Church-going family. Participation in the life of the Parish was a matter of fact for them. As the life of Joseph Kentenich shows, the participation in parish life was however not a general communal life, in a then through and through Christian milieu, but rather, the Church and its living faith in God became the formative force, which determined all the steps of Joseph Kentenich. 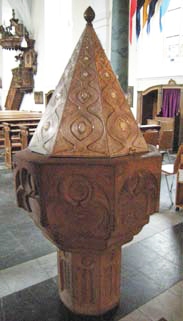 Three days after his birth on 19 November 1885 he was baptized in the Parish Church of Saint Cunibert with the name Peter Joseph. Peter Joseph was the name of the brother-in-law of the mother, who was also the godfather, as well as her only surviving brother, who lived in Strasbourg.

The grandmother Anne Mary was his godmother. The baptismal font dates from the year 1559. Nowadays on the wall next to its current location near the Church entrance is an inscription in sandstone, which refers to this baptised parish child of Gymnich.

No details concerning the participation of the Kentenich family in the life of the Parish Church Community are reported. Thus, one can assume that over the years the little Joseph as a young member of the Community did what all boys of his age did. 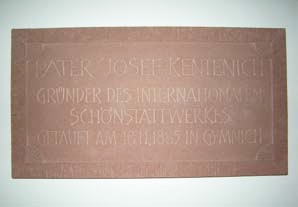 How do small children pass their time in the Church, when they are unable to read, sing along or understand what the Parish Priest is preaching about? They look at the pictures and statues, which were to be discovered in the sanctuary and on the walls of the Church nave. 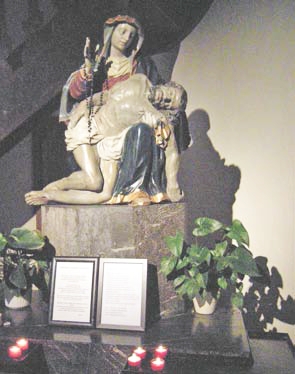 The original Gothic Church later acquired a Baroque high altar, which was removed at the beginning of the 20th century. In the choir one may admire a magnificent Sacred Heart window. A Pieta from 1600, which today stands at the entrance, and many statues of saints stimulated the imagination of the children. The Parish Patron Saint Cunibert, the Saints Sebastian, Roch, John Nepomuk, Matthias and Saint Brigida could be seen by the children.

In this way the children could intuitively absorb what the Church structure really wants to express: In the celebration of the Eucharist the earthly Church is gathered with the Church of heaven to encounter Jesus Christ, the Lord.

Father Kentenich felt already at the beginning of his priestly ministry that the closed religious and ecclesiastical milieu would not last much longer in its current form. More and more he saw that the members of his spiritual communities in the Schoenstatt Movement could live as Christians in a secular environment and be assertive as such.

An important element for him was that the communities should create a spiritual atmosphere. And this happens through a variety of signs and symbols representing what is important in the community. Saints and for the Church important personalities, women and men, stimulate the spiritual life of individuals and communities.

Jesus Christ, Lord of your Church.

(All:) We thank you that Father Kentenich was prepared for his service of the Church by the life in his home Parish Community.

We pray to you for your Church: May there also be people today who, with your help, love the Church like Father Ken-tenich and engage themselves in it.

We pray for our children. Let them find the way to you and to their personal calling in an environment that is seldom Christian.