8 On the path - Signs of a Christian culture 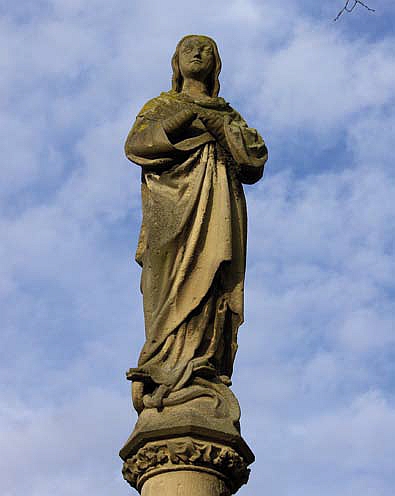 When passing through Gymnich, one encounters a place, which radiates a Christian atmosphere. Many chapels like the Plague Chapel next to the Church or Saint Anne’s Chapel, wayside shrines, crosses, Marian pictures, statues of saints, monuments and wells, both of old and of modern times, indicate a Christian heritage. Many of them are so old that they must have been seen
by the young Joseph Kentenich. Two such places are mentioned here. 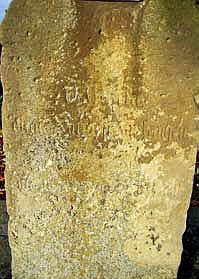 On 1 May 1856 Maximilian Count Felix von Wolff Metternich and Countess Hermenegilde Wolff Metternich built the 5.25 meter tall Marian Pillar on the square in front of the former Castle entrance. The old entrance that was lined with old lime trees is not so easy to recognize due to recently constructed buildings.

The inscription on the front reads: „O Mary, conceived without sin, pray for us who have recourse to thee”. Shortly before the erection of the pillar, on 8 December 1854, Pope Pius IX in his encyclical „Ineffabilis Deus“ - ‘The Ineffable God’ - proclaimed the dogma of the Immaculate Conception of Mary. According to this teaching of the Church, Mary was preserved from sin from the first moment of her life, because she was going to be the mother of God. This declaration of faith had been celebrated as a ‘Feast of the Church’ for a long time, since the tenth century in the Eastern Church as the „Day of the Conception of the Most Holy Theotokos by Anne“. Pope Clement XI introduced this belief as a Feast Day for the whole Catholic Church.

Thus this pillar had a direct relationship in Gymnich to the proclamation of the dogma. It shows how the official teaching of the Church took root in the life and faith of the local people. 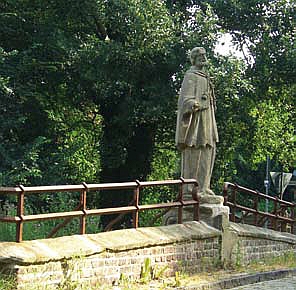 The oldest bridge of Gymnich, which is from the period around 1800, is dedicated to Saint John Nepomuk. The bridge, which with a span of eight meters passes over the river “Kleine Erft” which still supplies the needs of the Castle with water. The arches of the bridge, which are made of white sandstone, hold the statue of the saint on the north side keystone and on the south side bears the date 1857.

John of Nepomuk, who was born in 1350 in Pomuk near Pilsen in today’s Czech Republic, was murdered as part of the rift between King Wenceslas IV and the Archbishop of Prague. According to legend, the king wanted to know what his wife had confessed to the priest. As Nepomuk kept the seal of confession, the king had him pushed from the Charles Bridge into the Vltava. In this way Saint John of Nepomuk became the patron saint of bridges, including that of Gymnich.

These two testimonies of a Christian past, which the young Joseph Kentenich could assimilate, are examples of how the founder of the Schoenstatt Movement helped to build a sustainable Church of the future based on the foundations of the past.

For example what the Marian Pillar reflected as Church teaching, he wanted to proclaim today, in such a way that people should not only have Church teaching understood as truth, but rather, that the teachings should influence and enrich their lives.

Thus the way ahead with signs of a Christian history and culture will at the same time be a spiritual path in the future. New signs and styles of Christian life will emerge on this path. 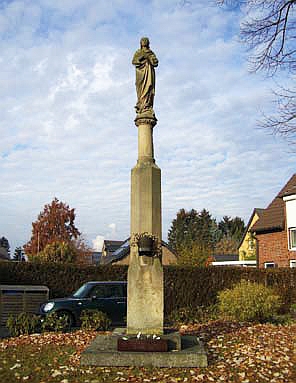 You lead your Church through history.

Again and again we may experience the beauty and joy of faith in credible people.

(All:) We thank you for Father Joseph Kentenich who is a witness of a living faith for us and for many.

We pray for the Church: Let the Church move from the strength of the past courageously and creatively into the future, so that people can experience faith.

We pray for the people of the hometown of Joseph Kentenich, for the people of this region and of the entire country: Let them discover and understand the richness of Christian heritage. Give them the foresight to make this heritage fruitful for the future.