The Schoenstatt Fathers congratulate the new Council of the International Federation of Schoenstatt Families. Hereunder you can read the communication we received today from the new leaders, Rosa María and Josef Wieland: 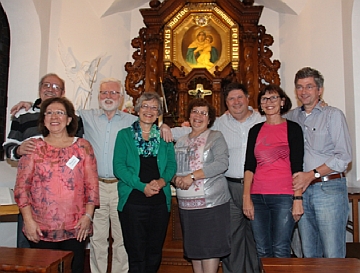 On 12 September 2015, day of the festivity of the Most Holy Name of the Blessed Virgin, the 3rd General Chapter of the International Federation of Schoenstatt Families elected a new international leadership team for a period of 6 years. The new team consists of the following couples:

The following substitutes have also been elected:

The General Chapter began on 3 September and ended on 13 September. Besides electing a new leadership team, the chapter approved the first statutes of the International Federation ad experimentum, listened to reports presented by the international and territorial leadership teams, deliberated many motions submitted by federation members from around the world and discussed the challenges of modern times faced by the families and by the Church.

The new leading couples and the all the Chapter members ask for prayers for the worldwide Federation of Schoenstatt Families.

The Chapter members thank the previous leadership team, composed by Marité and Ramón Marini (Paraguay), Gertrud and Hans Zier (Germany), María Teresa and Daniel Martino (Argentina) and Carola and Fernando Alliende (Chile), for their caring, faithful and loving attitude proven during their past tenure.

The International Apostolic Federation of Schoenstatt Families exists presently in 17 countries and has 1700 members (couples).