Mount Sion is the spiritual home of the Schoenstatt Fathers

The founder – Father Joseph Kentenich – gave the name to this place on the high ridge overlooking the Rhine Valley in 1966. Here he interpreted the significance and the task of both the community and the place. Hence, the community sees “Mount Sion” as a place, a legacy, and the founder’s entrustment of our mission. We want to live a vibrant relationship with God; so rooted we want to work for a world attached to God and, in him, able to find unity and harmony. Our vocation is to work totally for the inspiration, the organization, and the unity of the Schoenstatt Movement. 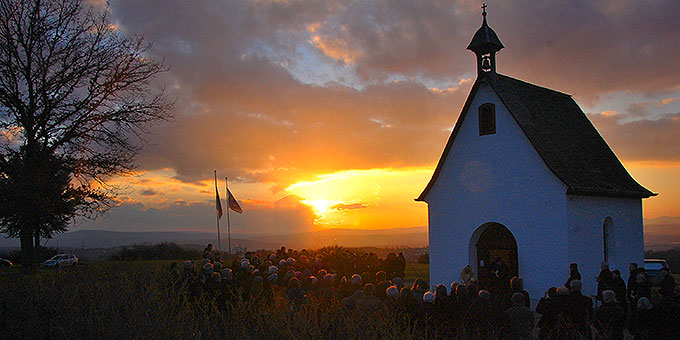 "What does MOUNT SION symbolize? It symbolizes a chosen place - a place of election. Secondly, it is a symbol of God's immanence, of an encounter with God. Further, it is naturally also a symbol of God's blessing. But it is also a place of prayer and a place where people feel safe. Finally, it is also a place where people feel safe. They feel safe, not in order to sleep, but in order to grow more deeply into God's heart. From this safety and inner fusion of hearts they should go out to impress the features of Christ on the world once more."

Seen biblically, the name Sion reminds us of the place of Pentecost

It points ahead to the perfection of the heavenly Jerusalem and back to the religious and unifying power which emanated from the Sion of the Old Testament. The name also points to the “Daughter of Sion”, to Mary, whose vocation was to prepare a human dwelling for God’s Son in this world. Sion also recalls the biblical words of Jesus about the Christians in the world whose way of life should shine like a city on the mountain (Mt 5:14).

Mount Sion is called to be a “God’s dwelling among men.” Our life here should take place in such a way that we find, with Mary through Christ in the Holy Spirit, the way to the Father.

The first building here was the Shrine, constructed in 1970 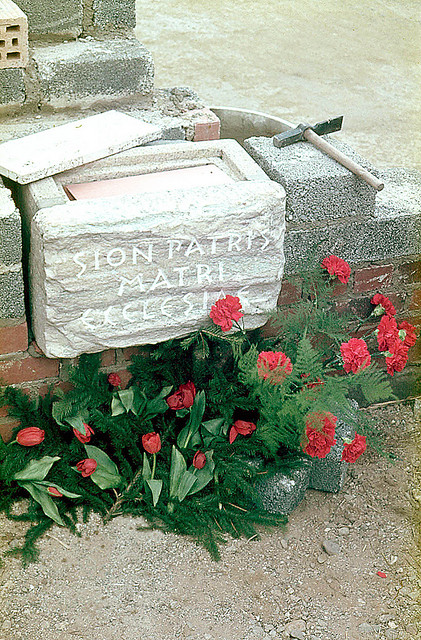 The foundation stone of the Shrine on Mount Sion in Schoenstatt comes from the marble foundations of the first St. Peter's church in Rome (Basilica of Emperor Constantine). It is connected to the end of the Second Vatican Council. In its official closing ceremony on December 8, 1965, Pope Paul VI promised Mary in gratitude, to build a church under the title "Mater Ecclesiae" (for a Roman suburban parish). On that day the construction of our "Matri Ecclesiae"- shrine in Belmonte, too, got its decisive impetus with a talk of Father Kentenich, present in Rome, and a prayer of commitment on the building site. – Our stone on Sion was one of four stones, which were selected for a possible foundation for the church promised by the pope and shown him that day. In March 1966, this stone was acquired of the "Fabrica" of St. Peter's Basilica by a course group of the 1965 newly founded Institute of Schoenstatt Fathers, and brought to Schoenstatt. On April 18, 1970, it was immured as foundation to the shrine on Mount Sion, with the programmatic inscription: "Sion Patris Matri Ecclesiae" (Sion of the Father, to Mary, the mother of the Church / for the Church, who is mother.) 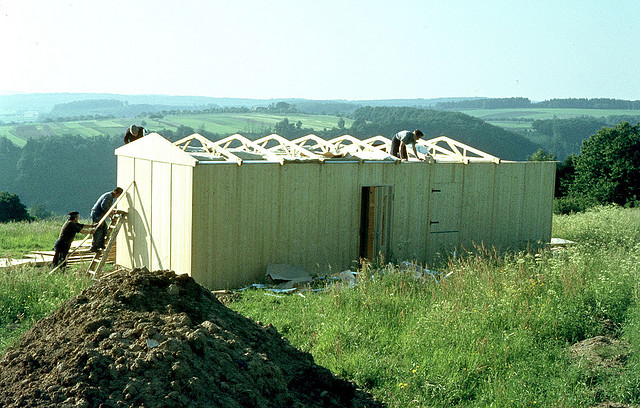 A group of contemplative Fathers lived for many years in wooden barracks near the Shrine. In the meantime the Father House has been built in the immediate vicinity of the Shrine, where the Pater Familias and the General Council live. Here is where international congresses and chapters take place.

The community understands itself as sent from Mount Sion to its tasks on the many continents. Here it asks for special blessings for its mission. Here is the place of unity and central encounter. From here it receives orientation and direction in the charism of the founder.